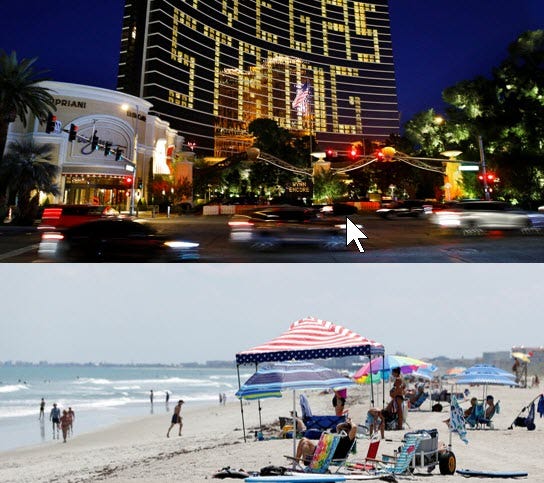 Florida beaches remained packed with partying college students as the coronavirus crisis gathered force, and the Republican governor was slow to impose social distancing in a tourist-dependent economy.

That may come back to haunt the U.S. state – and not just in the form of a sky-rocketing case load. According to a newly released study by Oxford Economics, Florida is among the states most vulnerable to the economic shock being caused by the pandemic.

Oxford ranked the 50 U.S states and Washington D.C. using 10 measures its economists felt could make a local economy more vulnerable, including the share of the population over 65, dependence on retail sales, and the importance of the tourist industry.

Maine, with its proportionately older population and comparatively large number of people who are self-employed or work in small businesses, is considered the most vulnerable state economy, according to Oxford. Nevada, with its massive casino-based tourism industry, was second, while rural Vermont was third.

Florida is the only heavily populated state near the top of the list, with a comparatively large share of its 21 million residents over the age of 65, and an economy that is relatively dependent on retail sales and tourism.

KUDLOW SAYS US ECONOMY COULD 'SNAP BACK' FROM CORONAVIRUS CRISIS

The state's COVID-19 case load topped 10,000 last week and it is adding a thousand cases a day. Governor Ron DeSantis imposed a statewide "stay at home" order that took effect Friday, weeks after some U.S. states.

"We see what's going on in New York now, we see that people are dying," Rick Scott, the Florida senator, told FOX News Channel on Saturday. "People are taking this very seriously now."

States such as New York and California that have so far had the heaviest COVID-19 case loads may actually be among the more economically resilient, the Oxford team found.

"Lockdown and containment measures are the key determinants of first-round economic impacts of the coronavirus, but structural economic vulnerabilities determine the severity of second-round impacts," Oxford lead economist Oren Klachkin wrote. Long-term results could depend on the strength of local government budgets and health systems.

Economists are struggling to get a grip on the potential aftermath of the crisis as it continues to deepen. Companies cut more than 700,000 jobs from their payrolls in March, a likely understated measure of rapidly rising unemployment: More than 6 million people filed for unemployment benefits in the week ended March 28 alone.

President Donald Trump initially downplayed the dangers of the virus and did not quickly recommend nationwide health orders. Local governments, which vary widely in their finances and ability to cope, had different initial responses to the threat, a fact that could shape the ultimate outcome of the crisis nationally.

The situation has produced a quick flowering of research on pandemic economics, with most studies finding that stricter health measures taken early on lead to deeper, but shorter, economic downturns and faster recoveries.

There are political as well as economic implications.

Florida, for example, is an important battleground state in the U.S. electoral system, and the perceived success or failure of efforts to control the virus and support local businesses and households could influence Trump's reelection chances.

IHS Markit U.S. regional economist Karl Kuykendall also ranked Florida among the more vulnerable states, using a different methodology focused on estimated declines in employment and economic output. The state may lose about 8% of its jobs by the end of the year, he calculated.

The manufacturing heavy "rust belt" states from Pennsylvania to Michigan, also politically important constituencies that swung the 2016 race for Trump, are in line to take similarly heavy hits to employment, Kuykendall estimated.

Personal finance site WalletHub.com used a broader set of metrics, including work from home capacity and local financial strength, for another ranking.

Florida is in the middle of that pack because of its comparatively few small businesses and stronger state finances, WalletHub found. It said Louisiana was most "exposed," with Maine and Nevada also high on the list. Among the more populous states, Pennsylvania and Illinois were in WalletHub's top 10.

None of the studies accounted for the help coming to households, businesses and local governments from the $2.3 trillion emergency rescue package approved by Congress in late March, or the wide set of programs established by the Federal Reserve.

The combined aim of those efforts is to offset the economic impact of the virus. Officials are focused now on whether the aid can reach where it is needed fast enough to matter.