St. Louis Federal Reserve President James Bullard on Wednesday painted a grim picture of the U.S. economy over the coming months — including unemployment possibly spiking to 42 percent — but sounded an optimistic note on the country’s eventual recovery from the coronavirus pandemic.

"By the time we get to the fourth quarter, I think that will be a boom quarter for the U.S. economy and we’ll be in full throttle again," Bullard told FOX Business' Maria Bartiromo.

Bullard's comments follow a bleak analysis by St. Louis Fed economists, which projected that unemployment could hit 32 percent in the second quarter as more than 47 million workers are laid off as a result of the pandemic. That would exceed the 24.9 percent peak during the Great Depression.

The figure was reached by taking the average of data in two other blogs by Fed colleagues: One estimates that 66.8 million Americans work in high-risk occupations, such as sales, production, food preparation and service. Other research concluded that 27.3 million workers have "high-contact" jobs, like barber and flight attendant, that require them to interact frequently with other people. 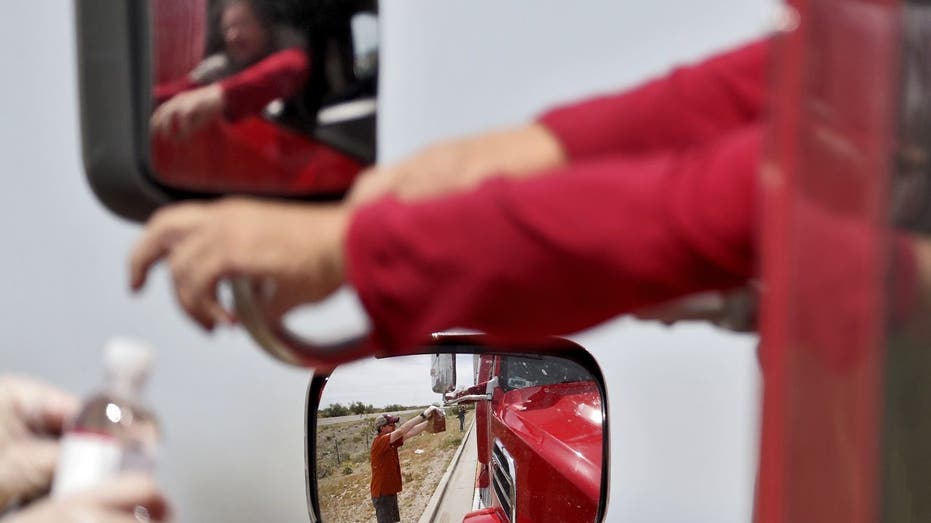 Chris Lyndberg gives a free lunch to a truck driver Tuesday at a rest area along I-10 in Sacaton, Ariz. (AP Photo/Matt York)

"That 47 million is people at risk," Bullard said. "They're at jobs that are consumer-facing, or that would otherwise be impacted by the virus situation. The question would be, how many of those people are actually going to go and seek unemployment insurance … I'm not sure that's really going to happen."

The unemployment rate could range anywhere from 10 percent to 42 percent, depending on how many individuals who are laid off collect unemployment benefits, he said.

Despite likely record-breaking unemployment numbers and other bleak economic data, Bullard said there’s nothing fundamentally wrong with the U.S. economy, meaning that it's poised for a solid rebound once COVID-19, the disease caused by the novel coronavirus, is contained.

"You're trying to deliberately slow the economy down in the second quarter and then you're going to speed it up in the third quarter, and it's going to be going very fast in the fourth quarter," he said. "I think that's still the right way to think about this. All viruses have been temporary."

The U.S. central bank, facing an economic threat that Bullard called "special," has unleashed its full firepower to support the economy, including slashing interest rates to near zero, purchasing an unlimited amount of Treasurys (a practice known as quantitative easing) and launching crisis-era lending facilities to ensure that credit flows to households and businesses.

The federal government has also taken a three-pronged approach to providing immediate relief for workers, small businesses and industries beleaguered by the outbreak. Last week, President Trump signed into law a more than $2 trillion stimulus package, a key tenet of which is up to $1,200 cash checks for adults earning less than $99,000 annually.

"I think there are plenty of resources," Bullard said. "We can get through this."