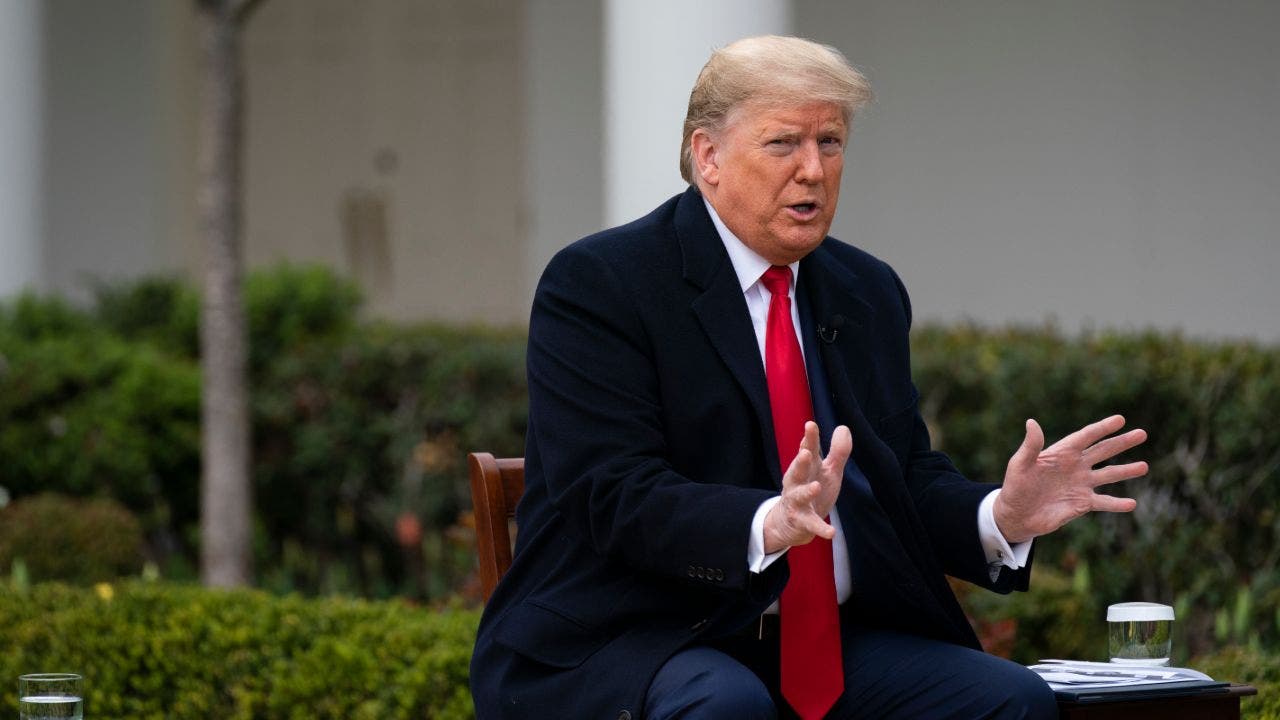 President Trump appears to be revising his plans to end the lockdowns that have crippled the US economy, while promising that the federal government could actually spend much more than the $2 trillion in economic stimulus to prevent a virus-related economic catastrophe, FOX Business has learned.

The president's relaxed timetable for restarting the economy and the total estimates for a government stimulus were made Tuesday during a private conference call between top White House officials, the president and a handful of major Wall Street investors, according to people with direct knowledge of the matter.

During the call, the White House aides and investors discussed parts of the market hardest hit by the financial panic that has accompanied the coronavirus's spread, and the staggering amount of government stimulus being contemplated to deal with the dire economic effect of the country's business shutdowns because of the pandemic.

A White House spokesman declined to comment on the meeting.

The White House indicated that the amount of money the government will likely spend on virus relief could far exceed the $2 trillion advertised in its spending bill, one person with direct knowledge of the call said. And when all the costs of the aid packages are added up, the total could reach as high as $10 trillion or possibly more, people on the call told FOX Business.

According to one person at the meeting, the White House indicated that the entire aid package could actually cost between $6 trillion and $10 trillion or more since the Federal Reserve is also pumping as much as $4 trillion through expansive monetary policy.

CORONAVIRUS OUTBREAK TO CAUSE SHARP CONTRACTION IN US ECONOMY: GOLDMAN SACHS

In reaction to the news that a stimulus package is likely to pass imminently, the Dow Jones Industrial Average rose more than 2,000 points Tuesday, its highest point gain in a single day since 1933.

"The fire power here is like nothing we have ever seen," said one person with direct knowledge of the call.

In an interview with FOX News, Trump said that he "would love to have the country opened up and just raring to go by Easter," which is on April 12. But according to people on the call, Trump struck a more circumspect tone, appearing to backtrack on comments he made to FOX.

Instead, Trump told the group that he would like to end the lockdowns and quarantines that have brought the U.S. economy to a near standstill "as soon as we could.” The president acknowledged that ending these measures could be at least a month away, according to a person with direct knowledge of the call. Trump's comments came as the investors were discussing the strain on the health care system and the rapidly rising caseload of coronavirus infections has placed on hospitals, people with knowledge of the meeting said.

White House officials explained on the call that they understand just how big a hit the U.S. economy has taken because of the pandemic's spread and the measures being used to slow the virus, including social distancing and quarantines. These measures have decimated small businesses such as restaurants. Small businesses employ about half of the American workforce, so with their widespread closures, some on Wall Street believe the nation's gross domestic product could fall 30 percent in the months ahead, while unemployment skyrockets.

People on the call made it clear to the president that despite the dire economic consequences they thought an ending of the various virus related lockdowns during the next two weeks, particularly in hard-hit areas such as New York and California, would be next to impossible, people with knowledge of the call told FOX Business. In a press conference Tuesday, Gov. Andrew Cuomo, of New York, said the apex of the pandemic in the Empire State is still two to three weeks away.

The conference call, which lasted about 40 minutes, also delved into areas of the capital markets hardest hit by investor's reaction to the pandemic. Parts of the debt markets are "collapsing," one of the participants told White House officials, the person with knowledge of the call said. This person added that executives communicated to Trump that banks are calling in loans to businesses and will only take cash as collateral, which has “frozen up” the lending market, and is crushing real estate prices, which is one of the biggest components of the U.S. economy.

But the conversation grew most animated when it turned to the stimulus package that Congressional Republicans and Democrats continue to bicker over even if Wall Street believes the bill will soon make it into law in the coming days. Indeed, White House officials said stimulus package will likely be approved by Congress soon even though Republicans and Democrats continue to argue over the plan’s details, another person with knowledge of the call said.

That optimism bled over into the stock market on Tuesday, which showed strong gains as the Dow spiked 2,112.98 points or 11 percent.

One person on the call described Trump’s demeanor as thoughtful, “he listened a lot and didn’t interrupt," though Trump and White House officials also it made it clear they are looking to balance people's health needs without crippling the economy and pushing the country into a depression.

The White House officials indicated that their goal is, at some point, to begin pushing, younger healthier Americans back into the economy, while keeping older Americans most susceptible to the virus sequestered.