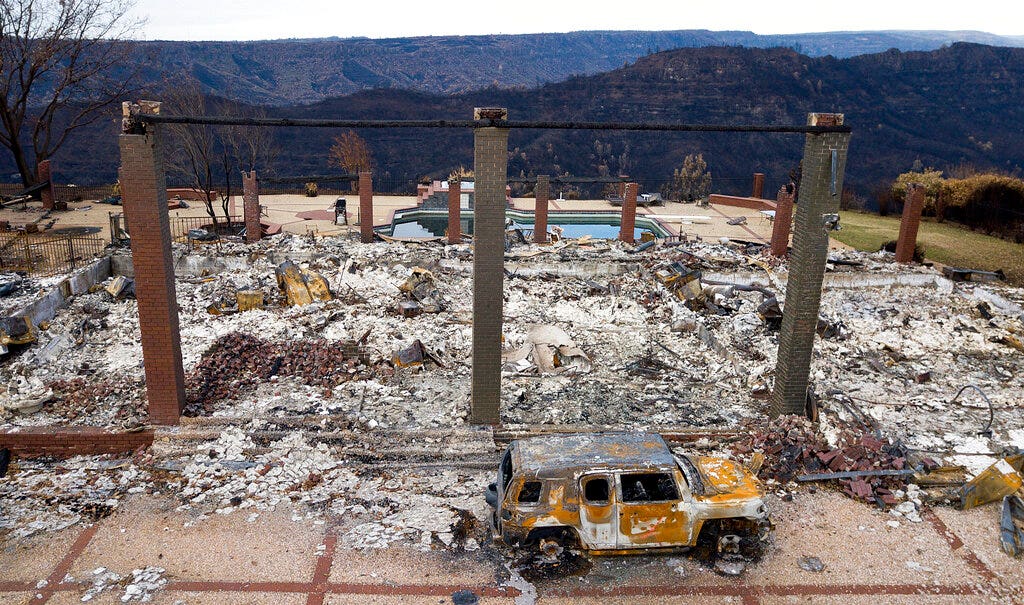 BERKELEY, Calif. — California power regulators are weighing a recommendation to back off plans to fine Pacific Gas and Electric an additional $462 million over a series of deadly Northern California wildfires rather than risk that the harsher punishment might scuttle the utility's plan to get out of bankruptcy.

The state's Public Utilities Commission is mulling whether to pare the penalties faced by PG&E as the result of a proposed revision floated by one of agency's five commissioners, Clifford Rechtschaffen. A document detailing the proposal was made public Monday.

In another development, PG&E announced it took steps to ensure it will not have to tap into a $13.5 billion fund set up for wildfire victims to pay a separate $4 million fine that will be imposed for the company's guilty plea to 84 felony counts of involuntary manslaughter stemming from a 2018 inferno triggered by its outdated electrical grid. Last week, PG&E disclosed its bankruptcy plan required that financial penalties for the crimes would come from the victims' fund.

Now that it has avoided that potential public relations challenge, PG&E is trying to clear another hurdle that could block its attempt to emerge from one of the most complex bankruptcy cases in U.S. history by June 30.

In documents made public Monday, Rechtschaffen made a case for the public utilities commission to reverse a decision issued last month requiring PG&E to pay a $2.1 billion fine for neglecting the maintenance of equipment blamed for causing the wildfires that killed nearly 130 people and destroyed thousands of homes in Butte and Sonoma counties and other parts of the utility's sprawling service territory during 2017 and 2018.

The proposed penalty added $462 million to a roughly $1.7 billion settlement that PG&E negotiated with regulators in December. The utility's critics argued that deal was too lenient, prompting the public utilities commission to impose an additional $200 million fine and other measures costing the company another $262 million.

But requiring PG&E to come up with the extra $200 million to deposit in California's general fund would violate agreements that the company struck with investors earlier this year to secure commitments to sell $9 billion worth of its stock to help fund $25.5 billion in settlements reached in its bankruptcy proceedings.

The settlements include the $13.5 billion victims fund to be used to pay more than 81,000 claims for losses suffered in the the wildfires that drove PG&E into bankruptcy last year. PG&E warned that requiring the company to pay the additional $200 fine would set off a chain of financial dominoes and upend its entire bankruptcy plan, depriving wildfire victims of a chance to be paid from its $13.5 billion fund.

“This is appropriate due to the unique situation of PG&E’s bankruptcy, its indebtedness to hundreds of wildfire claimants for loss of life and property, and the current upheaval in the financial markets,"Rechtschaffen wrote in a five-page explanation.

Like most companies, PG&E's stock has fallen sharply over the last several weeks amid the economic damage caused by the coronavirus. PG&E's stock sank 68 cents to close Tuesday at $8.99, less the half of what the shares were worth on Feb. 11 when they reached a six-month high of $18.34.

The recommendations also propose revisions to the tax benefits that PG&E could claim from its original settlement with regulators. If adopted, those changes could further chip away from last month's proposal to force PG&E shareholders to shoulder a heavier burden.

An administrative law judge has set an April 9 deadline for comments about Rechtschaffen's recommendation. A final decision is expected later in the spring.

PG&E managed to avoid using the wildfire victims fund to pay its $4 million criminal fine by negotiating a deal with 110 insurers receiving an $11 billion cash settlement as part of its bankruptcy fund.

The insurers will pay the $4 million fine using interest income and other investment gains generated from the $11 billion that PG&E is paying them.

PG&E also disclosed on Tuesday how much it paid CEO Bill Johnson last year. He got a pay package valued at $18.5 million for his first eight months on the job. That was roughly double the $9.3 million that Johnson's predecessor, Geisha Williams, received during her final year on the job in 2018.

Most of Johnson's package consisted of a previously disclosed $3 million bonus paid to him as part of his hiring last April in addition to long-term incentives designed to push him to improve the company's safety record while also boosting its stock price.