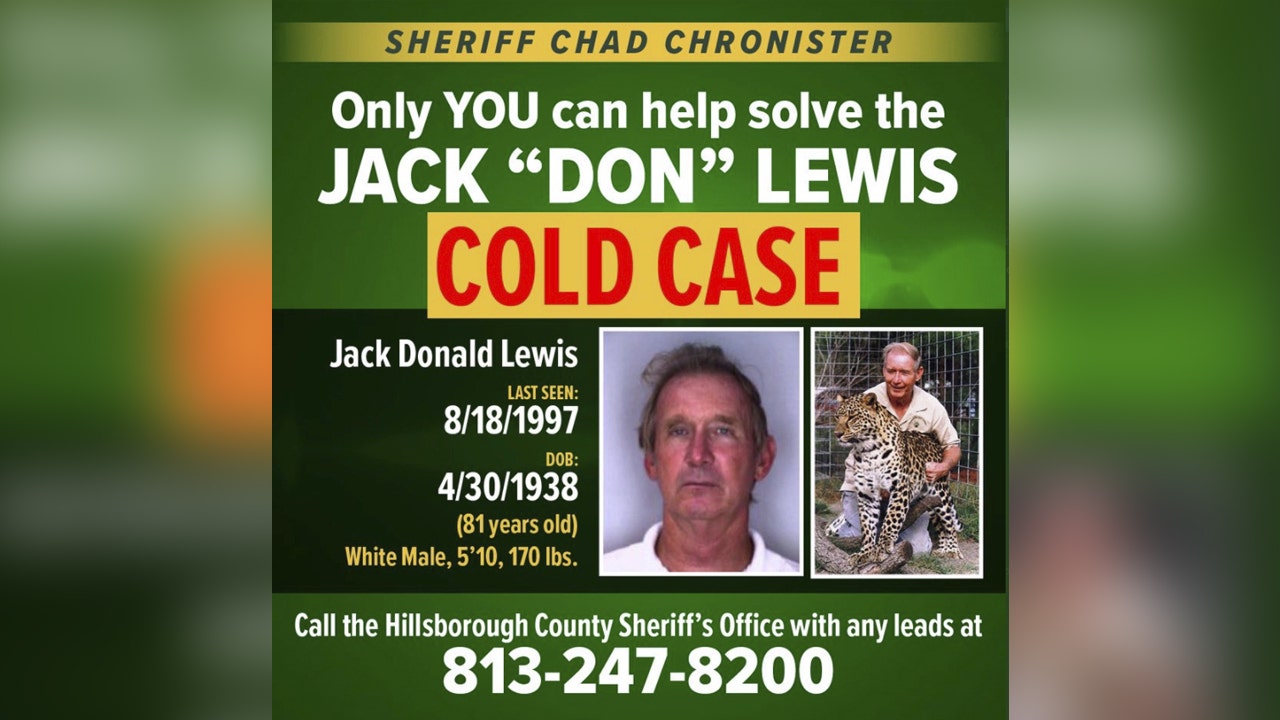 A Florida sheriff’s office is seeking new leads in the disappearance and presumed death of Jack "Don" Lewis after popular Netflix series “Tiger King” has spurred renewed interest in the case.

Hillsborough County Sheriff Chad Chronister is seeking new leads pertaining to the 1997 disappearance of Lewis. He was married to Carole Baskin, who runs Big Cat Rescue near Tampa.

Chronister posted on his personal Twitter account Monday that the popularity of the seven-part documentary made it a good time to ask for any new information.

The topic of Lewis’ disappearance was covered throughout the docuseries, “Tiger King: Murder, Mayhem and Madness,” which chronicles the life of Joseph Maldonado-Passage, who goes by the name “Joe Exotic” in the show, and several other exotic animal owners and zookeepers.

Maldonado-Passage and a number of other characters provided their own input on what happened to Lewis throughout the seven episodes, whether they believed his presumed death involved a meat grinder, a septic tank or the tigers Lewis and Baskin owned at the time. Another theory was that Lewis might have fled to Costa Rica.

Lewis went missing before a planned business trip to Costa Rica, investigators said shortly after his disappearance. His van was found near a Pasco County airport. Deputies searched the wildlife sanctuary he ran with his wife, but he was never found in Florida nor Costa Rica.

Meanwhile, a handful of the people featured in the documentary have spoken out against the show or to correct the record.

Most notably, Baskin called the docuseries “as salacious and sensational as possible to draw viewers,” in a post on her Big Cat Rescue Facebook page, accompanied by the link to a longer webpage on the topic.

“[I]t has a segment devoted to suggesting, with lies and innuendos made a cameo from people who are not credible, that I had a role in the disappearance of my husband Don in 1997. The series presents this without any regard for the truth or in most cases even giving me an opportunity before publication to rebut the absurd claims,” she wrote. “There is no short, simple way to refute so many lies.”

Shaquille O’Neal also provided an explanation for his cameo in the series during a March 25 episode of, “The Big Podcast with Shaq,” explaining that he had been to Maldonado-Passage’s zoo, but was not friends with the since-embattled zookeeper.

“So we go in there, and it’s a beautiful place, and the character that was there was Exotic Joe. We’re there and I dropped some donations for the tigers’ foods and all that. We take pictures with [the] tigers. We went back a couple times," he said. “Then we go back another time and we found out that he’s involved with all the stuff, and then, actually, I stopped going.”