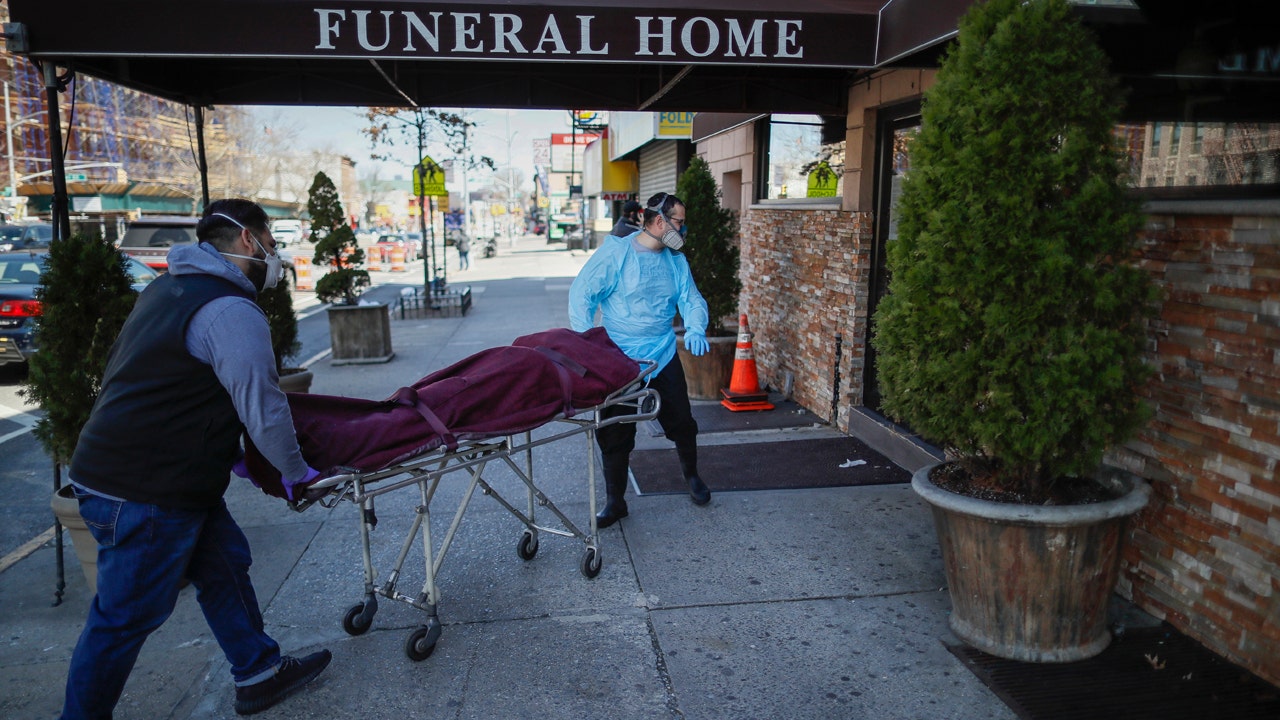 NEW YORK — Pat Marmo walked among 20 or so deceased in the basement of his Brooklyn funeral home, his protective mask pulled down so his pleas could be heard.

Like many funeral homes in New York and around the globe, Marmo’s business is in crisis as he tries to meet surging demand amid the coronavirus pandemic that has killed around 1,400 people in New York City alone, according to a tally from Johns Hopkins University. His two cellphones and the office line are ringing constantly. He’s apologizing to families at the start of every conversation for being unusually terse, and begging them to insist hospitals hold their dead loved ones as long as possible. 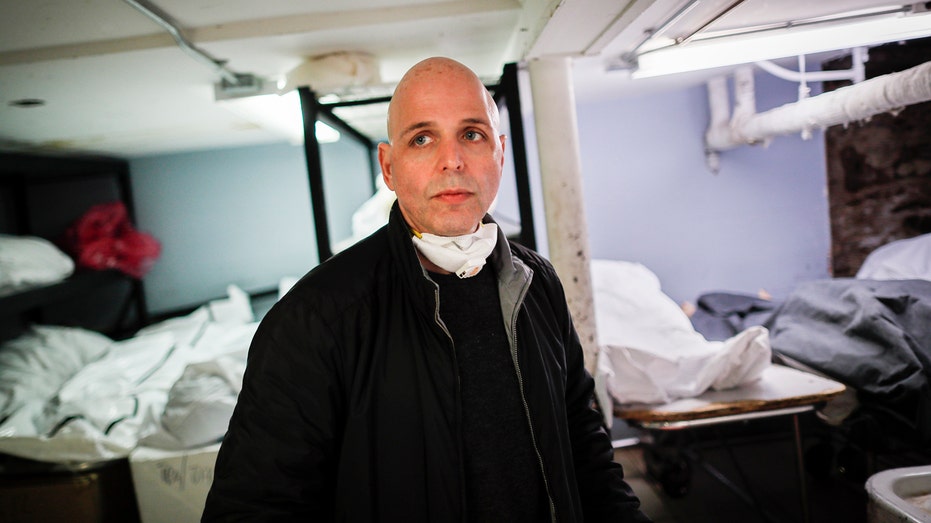 His company is equipped to handle 40 to 60 cases at a time, no problem. On Thursday morning, it was taking care of 185.

Funeral directors are being squeezed on one side by inundated hospitals trying to offload bodies, and on the other by the fact that cemeteries and crematoriums are booked for a week at least, sometimes two.

Marmo let The Associated Press into his Daniel J. Schaefer funeral home in the Sunset Park neighborhood of Brooklyn on Thursday to show how dire the situation has become.

US EMPLOYERS SHED 701,000 JOBS IN MARCH, UNEMPLOYMENT JUMPED TO 4.4%, AS CORONAVIRUS RAVAGES ECONOMY

He has about 20 embalmed bodies stored on gurneys and stacked on shelves in the basement and another dozen in his secondary chapel room, both chilled by air conditioners.

He estimated that more than 60% had died of the new coronavirus. For most people, the virus causes mild or moderate symptoms, but for some, especially older adults and people with existing health problems, it can cause more severe illness and lead to death. 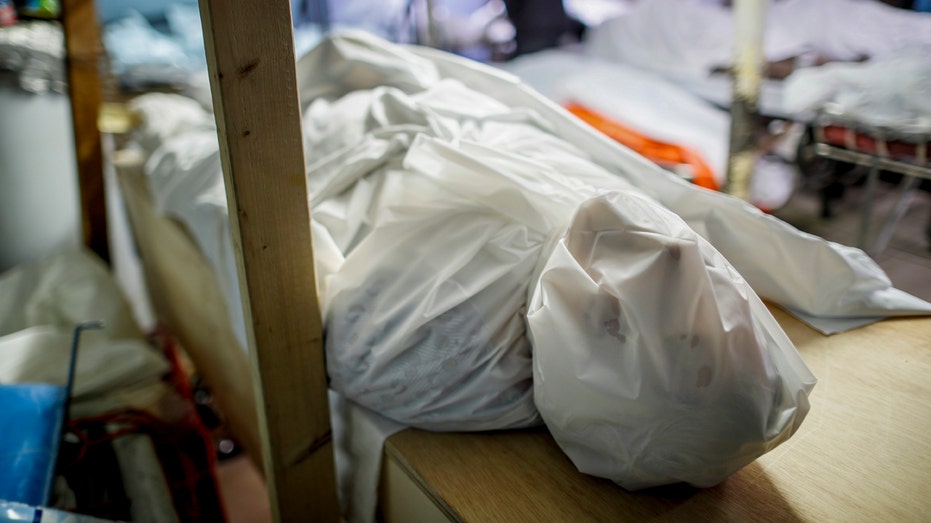 Hospitals in New York have been using refrigerated trucks to store the dead, and Marmo is trying to find his own. One company quoted him a price of $6,000 per month, and others are refusing outright because they don’t want their equipment used for bodies.

Even if he gets a truck, he has nowhere obvious to put it. He’s wondering if the police station across the street might let him use its driveway.

He’s also hoping the Environmental Protection Agency will lift regulations that limit the hours crematoriums can operate. That would ease some of the backlog.

“I need somebody to help me,” he said. “Maybe if they send me refrigeration, or guide me in a way that I could set up a refrigerated trailer that I could keep, and I could supervise.”

Patrick Kearns, a fourth-generation funeral director in Queens, said the industry has never experienced anything like this. His family was prepared on 9/11 for their business to be overrun, but with so many bodies lost amid the rubble, the rush never came.

He’s seeing it now. The Kearns’ business in Rego Park is just minutes from Elmhurst Hospital, a hot spot in the city, which itself has emerged as the epicenter of the U.S. outbreak. Through the first 15 days of March, the family’s four funeral homes held 15 services. In the second half of the month, they had 40.

Like Marmo, Kearns has converted a small chapel into a makeshift refrigerator with an air conditioner. Other funeral directors told The Associated Press this week they were prepared to take similar measures.

The surge in deaths is coming at a time when there are tight restrictions on gatherings, making saying goodbye a lonely process. 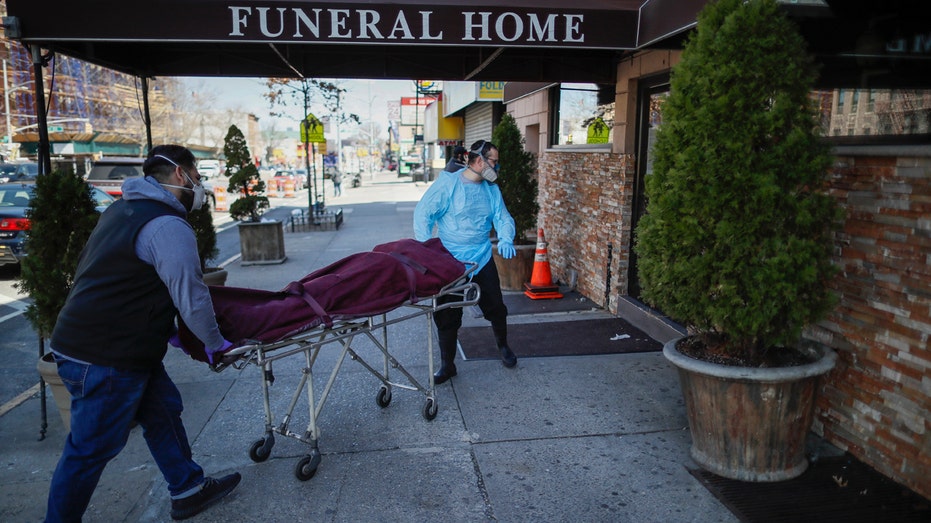 A family at Green-Wood Cemetery in Brooklyn this week leaned over a yellow chain serving as a cordon and tossed roses at the casket of a loved one. Another in Queens offered final goodbyes through the windows of their cars. At one cemetery in the Bronx, where visitors were barred entirely, a funeral director stood over the grave and took photos to send to mourners.

“The whole process, including the experience for the family during the funeral, is one of sort of isolation rather than the support,” said Bonnie Dixon, president of Maple Grove Cemetery in Queens.

Jackie McQuade, a funeral director at Schuyler Hill funeral home in the Bronx, has struggled to tell families no. But she has no choice, given rules limiting services to immediate family only, if that.

One cemetery she worked with has locked its gates to family and friends. Only she and a priest were allowed at the site of a burial. She photographed the casket being lowered, hoping it could bring some closure to the family.

“We would be going crazy if it were one of our loved ones,” she said. “We’re bearers of bad news on top of a sad situation.”

WHAT IS PLASMA THERAPY FOR CORONAVIRUS TREATMENT AND DOES IT WORK?

He’s set to host a funeral Friday for a 36-year-old New York City subway driver who died last week helping riders evacuate a burning train. There will be a limited service in his main chapel, where he has 10 chairs, lined in two rows with 6 feet (2 meters) between each. The best he can do while respecting “social distancing” guidelines.

“The guy deserves a funeral down the Canyon of Heroes,” Marmo said, referring to a stretch of Broadway in lower Manhattan where ticker tape parades are traditionally held. “Is he going to get that? He’s not going to get that. And it’s horrible.”