WUHAN, China — The city at the center of China’s virus outbreak was reopening for business Monday after authorities lifted more of the controls that locked down tens of millions of people for two months.

“I want to revenge shop,” declared an excited customer at one of Wuhan’s major shopping streets.

Customers were still scarce. Those who ventured out were greeted by shop employees who wore masks and carried signs that told them to “keep a safe distance.”

A teacher from the eastern city of Nanjing was visiting her family in Wuhan when most access to the city of 11 million was suspended Jan. 23 to stem the coronavirus spread. 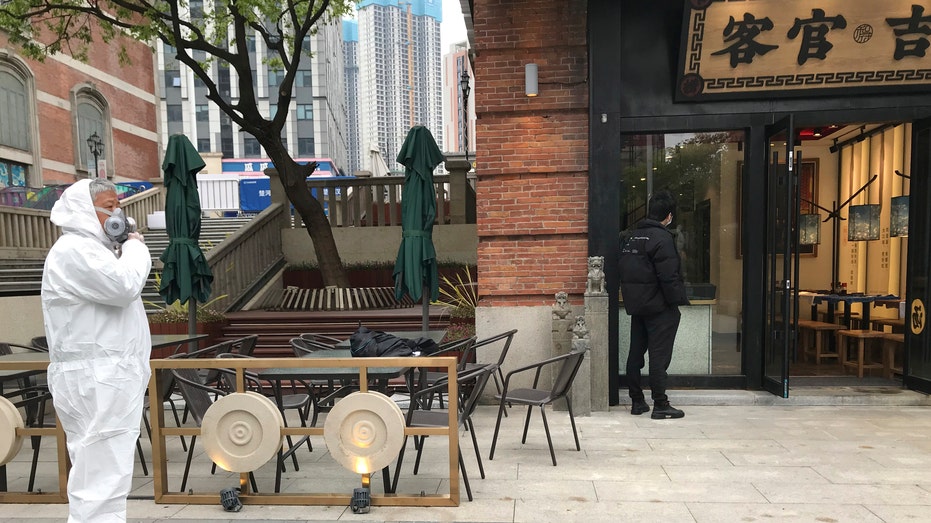 “I’m so excited, I want to cry,” said the woman, who would give only the English name Kat, at the Chuhe Hanjie pedestrian mall.

“After two months trapped at home, I want to jump,” she added, jumping up and down excitedly.

While governments worldwide tighten travel and other controls, the ruling Communist Party has rolled back curbs on Wuhan and other areas as it tries to revive the world’s second-largest economy after declaring victory over the outbreak.

The city in Hubei province is the last major population center still under travel controls. Residents were allowed to go to other parts of Hubei but could not leave the province. Restrictions on other Hubei residents were lifted March 23. The final curbs on Wuhan end April 8.

Wuhan became the center of the most intensive anti-disease controls ever imposed after the virus emerged in December. Some researchers suggest it may have jumped to humans from a bat at one of the city’s wildlife markets. 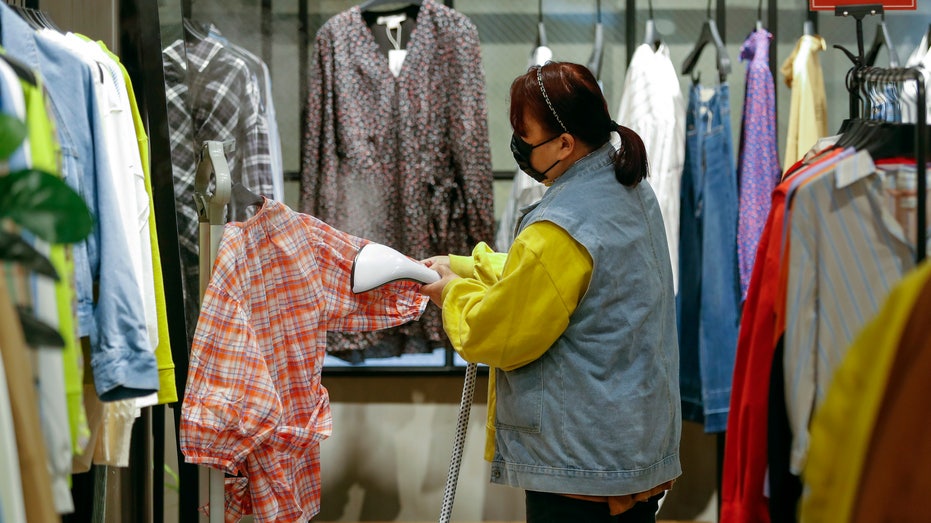 In this photo released by Xinhua News Agency, a worker wearing a protective face mask irons clothes at a re-opened shopping mall in in Wuhan in central China’s Hubei province, Monday, March 30, 2020. (Shen Bohan/Xinhua via AP)

The ruling party suppressed information about the outbreak and reprimanded doctors in Wuhan who tried to warn the public. As late as Jan. 19, city leaders went ahead with a dinner for 40,000 households to celebrate the Lunar New Year.

Local leaders held one more event, a Jan. 22 holiday gala at which musicians and actors were sniffling and coughing, before the government acknowledged the severity of the problem. The next morning, residents awoke to news that their sprawling city that straddles the Yangtze River was cut off from the outside world.

Wuhan became the center of a massive effort to treat the sick, understand the virus and stop its spread. Two temporary hospitals with more than 1,000 beds each were built and a third was set up in an exhibition center. Hundreds of military doctors and nurses were dispatched to the city, along with tons of medical supplies.

Police set up roadblocks at expressway entrances. Only truckers leaving the city to collect food and a handful of other drivers with official passes were allowed through. Bus and subway service was shut down.

Restaurants, shops, cinemas and other businesses were ordered to close, leaving streets empty and silent in a foreshadowing of controls that would spread to other countries. Families were ordered to stay home.

Restrictions spread to cities near Wuhan and eventually expanded to cover some 800 million people, more than half of China’s population.

President Xi Jinping visited Wuhan for the first time March 10 in a show of official confidence the virus was under control. The next day, the government began to ease controls on Hubei, allowing some factories and other businesses deemed essential to reopen.

On Monday, about 75% of shops in the Chuhe Hanjie mall in the city center were open but many imposed limits on how many people could enter. Shopkeepers set up dispensers for hand sanitizer and checked customers for signs of fever.

Buses and subways started to run again Saturday and the train station reopened, bringing thousands of people to the city.

At the same time, the ruling party rolled out a massive propaganda effort to portray its leaders as the heroes of the outbreak and deflect accusations they allowed the virus to spread due to politically motivated foot-dragging. 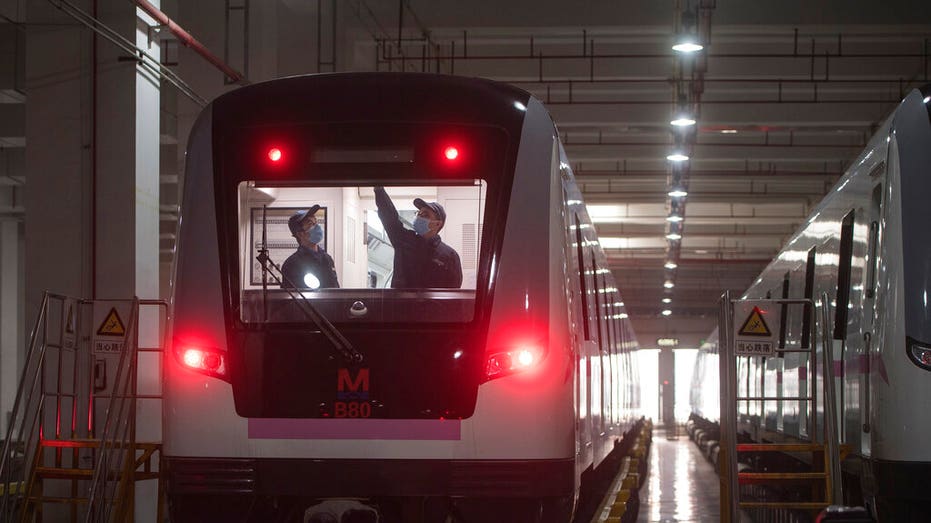 In this March 23, 2020 photo released by Xinhua News Agency, workers prepares a subway train for restoration of public transport in Wuhan, in central China’s Hubei province. (Xiao Yijiu/Xinhua via AP)

Government spokespeople have suggested the coronavirus’ origin is unknown, contradicting earlier official statements that it came from Wuhan. A foreign ministry spokesman said the virus might have been brought by visiting American military officials, a claim that prompted an angry response from Washington.

Wuhan suffered 2,547 coronavirus deaths, accounting for about 80% of China’s total fatality toll of 3,186 as of Sunday, according to the National Health Commission. The country had a total of 81,470 confirmed cases, though some foreign commentators have accused Beijing of failing to report the full total of deaths and illnesses.

Officials are under orders to revive manufacturing, retailing and other industries while also preventing a spike in infections as people return to work.

This week, visitors to Wuhan were required to report how they arrived and their reason for coming. Hotel guests were checked twice a day for fever. They were required to show a code on a smartphone app that tracks the user’s health status and travel.

Passengers who wanted to board a public bus had to show the smartphone health code to volunteers in red vests. 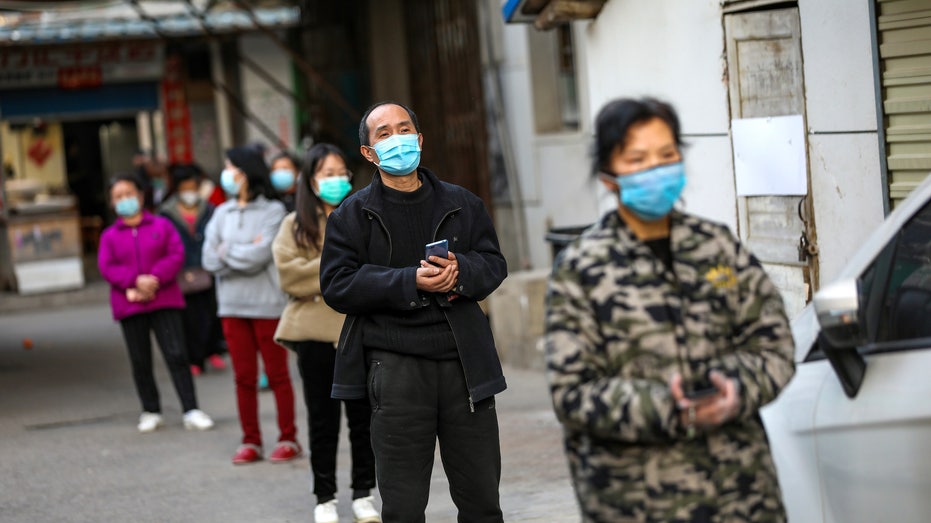 In this March 18, 2020 photo, people stand in a spaced line as they wait to buy pork at the entrance gate of a closed residential community in Wuhan in central China’s Hubei Province.(Chinatopix via AP)

Customers at the upscale Wuhan International Mall were greeted by employees who wore masks and carried signs that said, “Please wear masks all the way. Please don’t gather. Please keep a safe distance.”

Automakers and other manufacturers in Wuhan reopened but said they needed to restore the flow of components from suppliers before production can return to normal levels.

Some were waiting for employees who went to their hometowns for the Lunar New Year holiday and were stranded when plane, train and bus service in areas deemed at high risk were suspended.

The owner of a candy shop in the Chuhe Hanjie mall said two of her four employees were back at work but she wasn’t sure whether the others were willing to come back.

“We’ve only prepared a little stock,” said the owner, Li Zhen. “Most people are still afraid of the virus.”

A poster at the entrance to the mall asked customers to wear masks and cooperate with fever checks.

A banner nearby said, “Wuhan We Are Coming Back. Thank You.”

Two women in protective clothing that identified them as medical workers were surrounded by pedestrians who waved Chinese flags at them in a gesture of gratitude. Li gave them bags of candy.

“We may have to wait for a while to see when things can return to normal,” Li. said