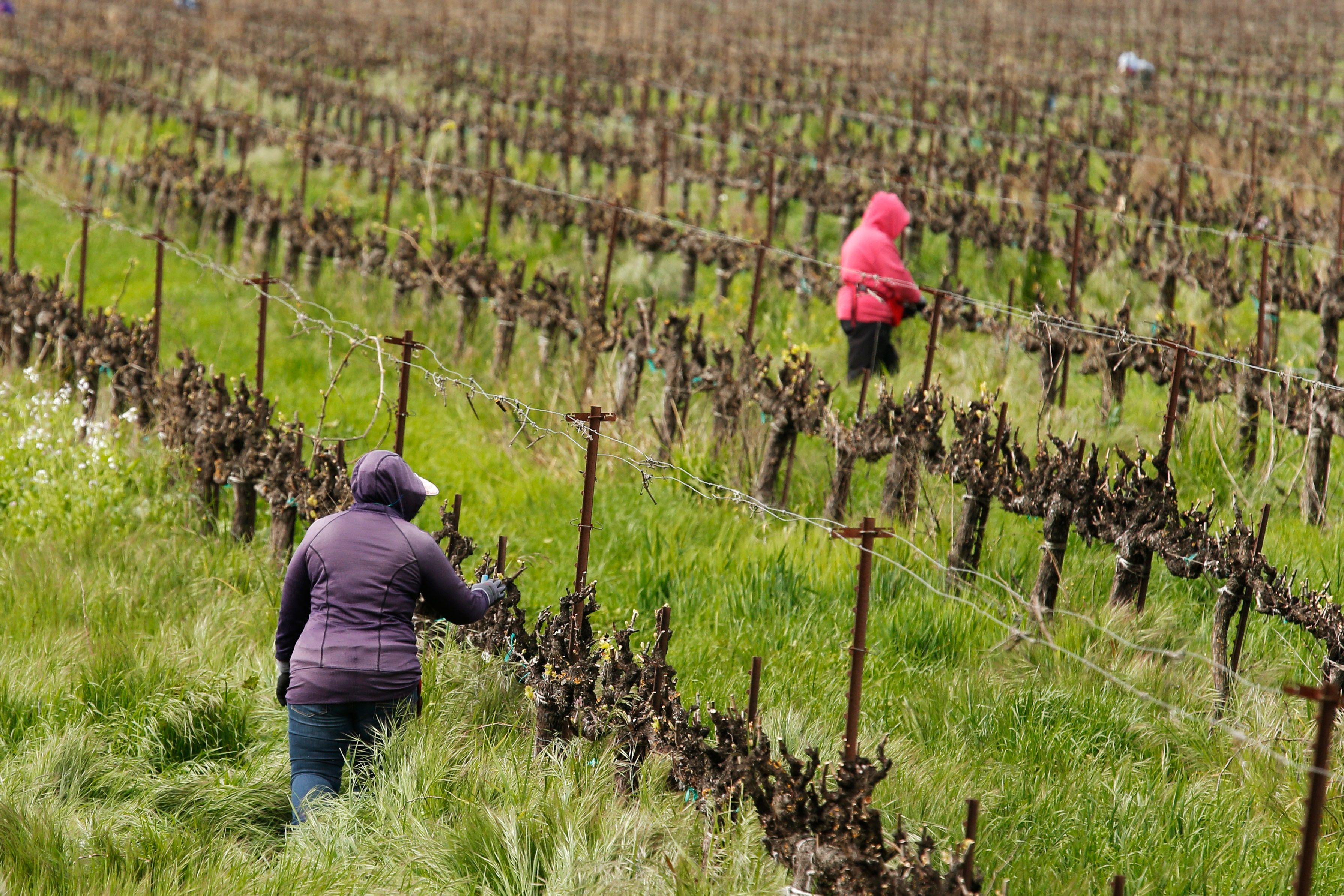 SACRAMENTO, Calif. — Salvador Calzadillas isn't worried about catching the coronavirus when he's picking mandarin oranges in the trees in central California. But he said the mere act of getting to the groves each day puts him and his wife, also a farmworker, at risk, and there’s nothing they can do to change that.

Farmworkers, after all, can't work from home.

Calzadillas and his wife are among half a dozen workers who crowd into a car or van to get to the groves a 40-minute drive away. There, they are huddled in a group to get daily instructions — without regard for social distancing, he said.

“There’s been no changes so far, everything is the same,” Calzadillas said. “Many of my co-workers say it’s like we’re immortal, we’re working just the same. There’s no prevention, and we keep working.”

The 31-year-old is one of many workers on farms operating as essential businesses in the heart of California's farm-rich Central Valley, supplying food to much of the United States even as schools, restaurants and stores have closed down because of the virus. 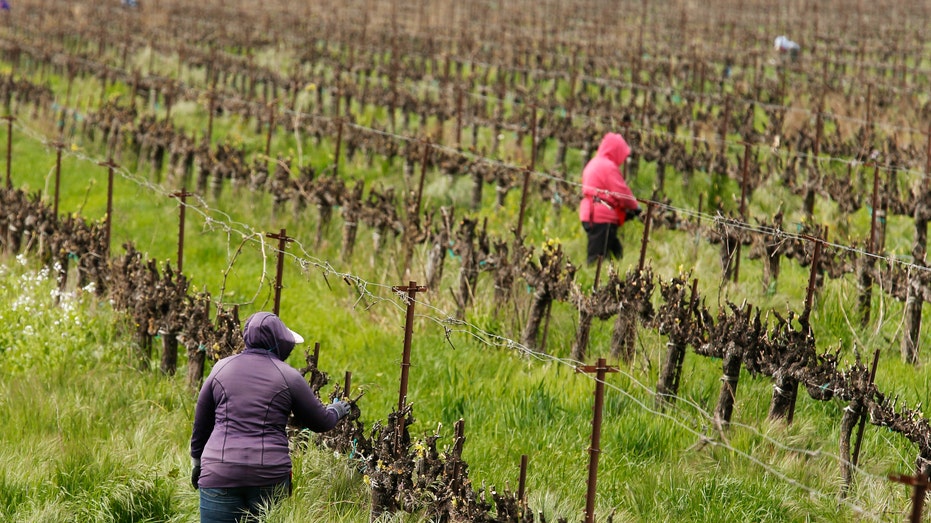 Farmworkers keep their distance from each other as they work at the Heringer Estates Family Vineyards and Winery in Clarksburg, Calif. (AP Photo/Rich Pedroncelli)

More than a third of the country's vegetables and two-thirds of its fruits and nuts are grown in California, whose farms and ranches brought in nearly $50 billion in 2018, according to the state Department of Agriculture.

Agriculture groups and union leaders are urging employers to take extra precautions to prevent the outbreak from spreading among California's farmworkers, who are already in short supply. Workers getting sidelined by illness could jeopardize crop yields and disrupt the food supply.

Some farms are heeding the call, union officials and growers say. But it can be difficult to separate workers by 6 feet (2 meters) as recommended because of the way certain crops are grown, said Dave Puglia, president of Western Growers, a group representing family farmers in California, Arizona, Colorado and New Mexico.

And efficiency is also critical, he said, with farmers facing pressure to restock grocery shelves.

“You would have to stagger the workers who are harvesting,” Puglia said. “That is a very inefficient and a very, very costly way to operate, and most farmers wouldn't be able to do it. They would be losing way too much money.”

Western Growers said many members have added sanitation stations in the fields and required hand-washing before and after work as well as spaced out workers in packing facilities.

United Farm Workers is using the moment to push for longstanding requests, including removing the need for a doctor's note and other hurdles to getting sick pay. In a letter to the agriculture industry, the union said workers should be able to wash their hands frequently and be encouraged to stay home if they are sick.

"What we're finding is that most growers are not communicating with their employees to even share the basics: how to practice best practices (like) washing your hands" and keeping distance from others, said Armando Elenes, secretary treasurer at United Farm Workers, which represents up to 27,000 seasonal workers. 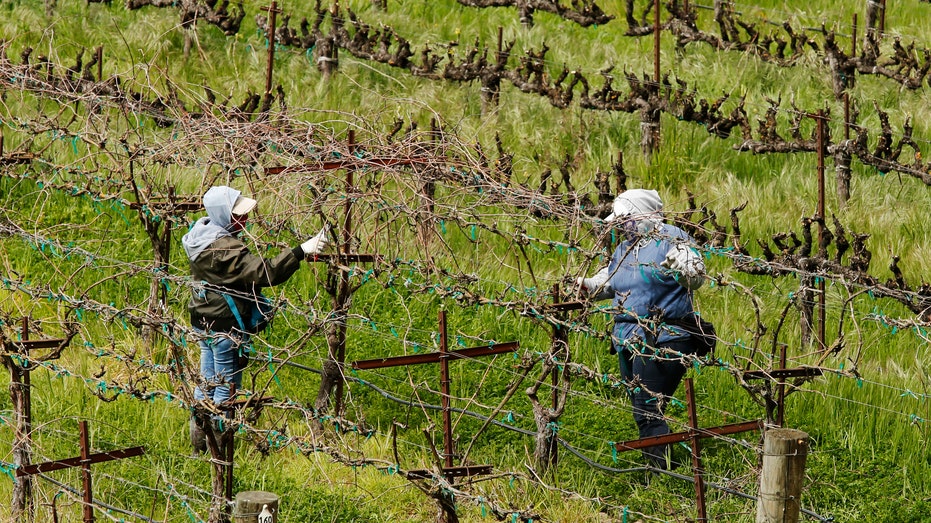 Farms continue to operate as essential businesses that supply food to California and much of the country as schools, restaurants and stores shutter over the coronavirus. (AP Photo/Rich Pedroncelli)

He said the company, which operates in California's Coachella Valley and Central Coast, had workers use gloves and sanitized equipment to ensure food safety long before the virus appeared.

“One of the biggest changes is just in the training and education,” he said, including encouraging workers to keep a safe distance from each other, even on breaks. “Partly for personal safety, but it’s also for, ‘Hey, we’re feeding the nation. We’re creating food the nation needs right now.’”

The coronavirus crisis has drawn fresh attention to farmers' critical role, with residents finding some supermarket shelves cleaned out by people stocking up and then hunkering down in their homes.

The Centers for Disease Control and Prevention says the threat of contracting COVID-19 from food or food packaging is low. Farmers and workers are mostly concerned about passing it to each other.

For most, the coronavirus causes mild or moderate symptoms, such as fever and cough that clear up in two to three weeks. For some, especially older adults and people with existing health problems, it can cause more severe illness, including pneumonia and death.

As of Friday, more than 90 people have died of the virus in California and over 4,600 have tested positive, according to a tally by Johns Hopkins University. Most cases are in the San Francisco Bay Area and around Los Angeles.

Leti Martinez, who picks mandarin oranges, said her employer told her little about the virus except to explain that the farm is allowed to keep operating. The 31-year-old said she wears gloves to prevent her hands from getting cut and wraps a cloth around her face to keep out the dust. But she is worried about her commute with other workers and said they sometimes face a shortage of running water in the bathrooms once they’re there.

Another concern is conditions for foreign workers in the U.S. on temporary agricultural visas, known as H-2As. They often live in close quarters, sometimes with bunk-style beds or in motels provided by their employers, and commute together in vans and buses.

A coalition of farmworker advocates has asked U.S. officials to require employers to provide at least 6 feet between beds for such workers and that they be tested for the virus before entering the country. 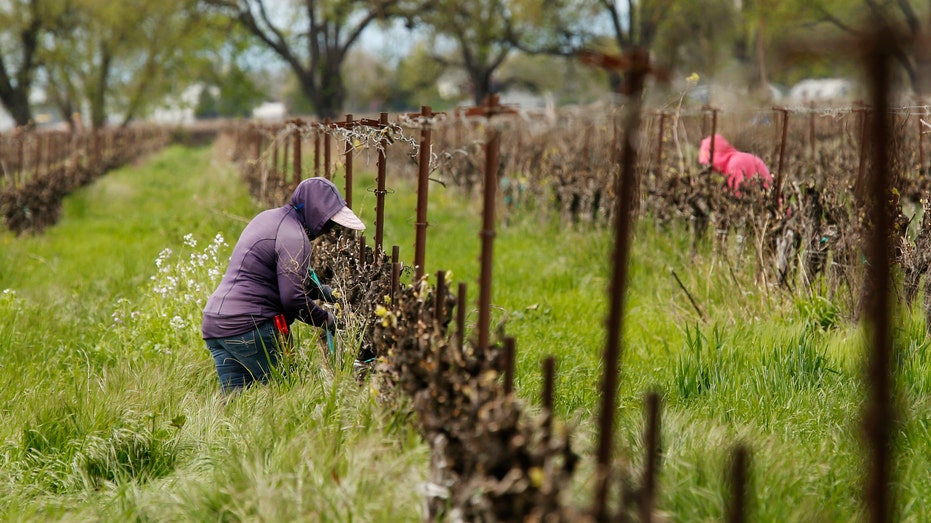 In this March 24, 2020, photo, farmworkers keep their distance from each other as they work at the Heringer Estates Family Vineyards and Winery in Clarksburg, Calif. (AP Photo/Rich Pedroncelli)

A Labor Department spokesman said this week that there were no announcements about changed working conditions for H-2A workers.

Those workers account for a small percentage of farm labor overall but are significant in Colorado, which has a shorter growing season, and for certain crops, like berries, said Puglia of Western Growers.

To address conditions at the thousands of farms that the California Farm Bureau Federation represents, its president, Jamie Johansson, said he has told farms to have workers go out in smaller groups “when possible.” His organization also says hand-washing on farms is routine for food safety reasons.

Heringer Estates, a 152-year-old family-owned vineyard and winery in Clarksburg, has 30 workers growing its grapes. Steve Heringer said workers now have more hand sanitizer and already use their own gloves for field work.

“If they're working in rows, (we) have them working back to back” to maximize distance, he said. “It's had pretty little impact on the vineyard side, but we have a heightened awareness.”