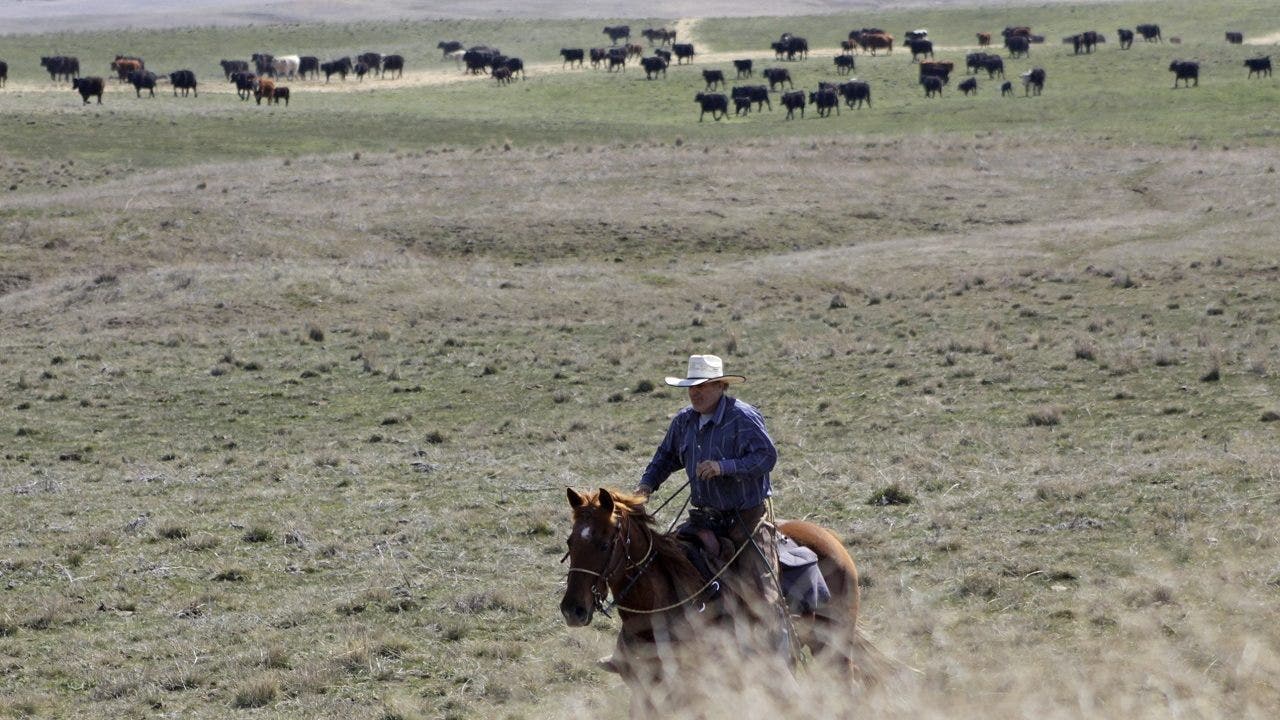 As the coronavirus rages across the United States, mainly in large urban areas, more than a third of U.S. counties have yet to report a single positive test result for COVID-19 infections, an analysis by The Associated Press shows.

Data compiled by Johns Hopkins University shows that 1,297 counties have no confirmed cases of COVID-19 out of 3,142 counties nationwide. Of the counties without positive tests, 85 percent are in rural areas — from predominantly white communities in Appalachia and the Great Plains to majority Hispanic and Native American stretches of the American Southwest — that generally have less everyday contact between people that can help transmit the virus.

CORONAVIRUS FIGHT GETTING $12B FROM WORLD BANK TO AID POOR COUNTRIES

At the same time, counties with zero positive tests for COVID-19 have a higher median age and higher proportion of people older than 60 — the most vulnerable to severe effects of the virus — and far fewer intensive care beds should they fall sick. Median household income is lower too, potentially limiting health care options. 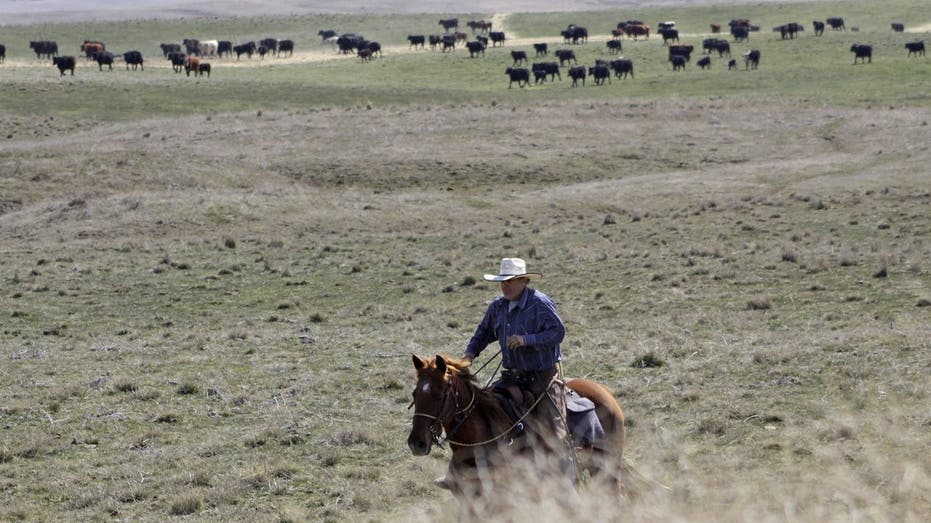 In this photo taken March 20, 2020, cattle rancher Joe Whitesell rides his horse in a field near Dufur, Oregon, as he helps a friend herd cattle. (AP Photo/Gillian Flaccus)

The demographics of these counties hold major implications as the Trump administration develops guidelines to rate counties by risk of the virus spreading, empowering local officials to revise social distancing orders that have sent much of the U.S. economy into freefall. President Donald Trump has targeted a return to a semblance of normalcy for the economy by Easter Sunday, April 12.

Experts in infectious disease see an opportunity in slowing the spread of coronavirus in remote areas of the country that benefit from “natural” social distancing and isolation, if initial cases are detected and quarantined aggressively. That can buy rural health care networks time to provide robust care and reduce mortality.

But they also worry that sporadic testing for coronavirus could be masking outbreaks that — left unattended — might overwhelm rural health networks.

MARKET DOWNTURN AMID CORONAVIRUS FEARS WILL REVERSE IN FUTURE: EXPERT

“They’ll be later to get the infection, they’ll be later to have their epidemics,” said Christine K. Johnson, a professor of epidemiology at the University of California, Davis. “But I don’t think they’re going to be protected because there’s nowhere in the U.S. that’s isolated.”

Counties that have zero confirmed COVID-19 cases could raise a red flag about inadequate testing, she said.

“I hope the zeros are really zeros — I worry that they’re not doing enough testing in those regions because they’re not thinking they’re at risk,” she said.

In New Mexico, a state with 2 million residents spanning an area the size of Italy, Democratic Gov. Michelle Lujan Grisham has moved aggressively to contain the coronavirus’ spread with a statewide school shutdown and prohibition on most gatherings of over five people.

Nearly half of the state’s 33 counties are free of any positive coronavirus cases. New Mexico is among the top five states in coronavirus testing per capita, though some virus-free counties aren’t yet equipped with specialized testing sites beyond samplings by a handful of doctor offices. 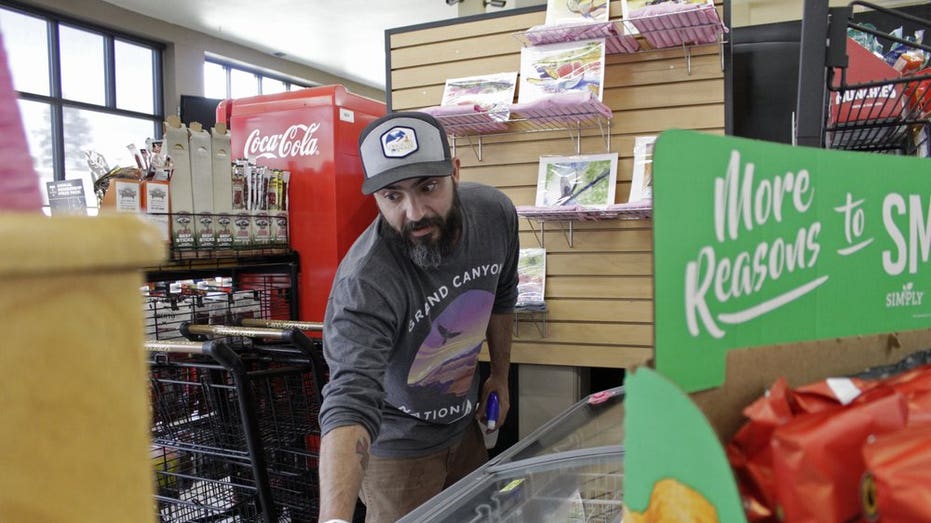 In this photo taken March 20, 2020, Mike Johnston, a clerk at the Maupin Market in tiny Maupin, Oregon, wipes down the ice cream case to protect customers from the new coronavirus. (AP Photo/Gillian Flaccus)

Torrance County Manager Wayne Johnson said plans are being prepared for the first three dedicated COVID-19 testing sites, in the high-desert county of 15,000 residents that spans an area three times the size of Rhode Island.

A statewide stay-at-home order is keeping many residents from commuting to jobs in adjacent Bernalillo County, the epicenter of the state’s COVID-19 infections, with 93 confirmed cases out of a state government tally of 208 as of Saturday night.

“We don’t have any test sites open, and part of that is that we don’t have any needs for the test yet,” Johnson said. Still, Johnson said he worries that an outbreak could overwhelm the county’s sole local medical clinic and an all-volunteer corps of emergency medical technicians.

The state´s first of two coronavirus-related deaths occurred last Sunday within a southern oil-producing region in Eddy County, where two other positive tests have surfaced. A man in his late-70s died shortly after arriving at a hospital in Artesia, and tested positive postmortem. He had previously visited two health clinics, and at the hospital five staff were quarantined for possible exposure even though they wore face masks.

State Deputy Epidemiologist Chad Smelser said health officials have continued to painstakingly retrace the steps of infected patients and notify people who came into contact with them. There are dozens of connections per infection on average.

“We know the details of his prior visits in the health care system,” Smelser said of the deceased Eddy County patient. “We’ve worked with those physicians to assess their exposure. And we do not believe that he acquired it in the health care setting.”

State health officials say it is unclear how many people have been tested for coronavirus in each county.

Medical experts say uneven testing patterns across the country make it difficult to gauge whether remote areas are really better off.

“It’s a fundamental unknown,” said Benjamin Neuman, a virologist at Texas A&M University in Texarkana. “I think there is some truth to that notion that there are lower infection rates out there” in rural areas.

He said he fears for homeless populations and undocumented migrants.

?We hope they stay safe. Those would be hard places to get rid of the coronavirus,¨ Neuman said.

Complaints that testing is not readily available extend to the crossroads town of Crossett in southern Arkansas, where surrounding Ashley County has no confirmed coronavirus cases.

Disabled veteran Marty Zollman, 42, of Crossett says his wife, a clothing store clerk, and teenage daughter sought coronavirus testing this week for fever and flu-like symptoms at a local health clinic and were turned away.

“We might be contagious, but no one will test her,” Zollman said of his wife, Janet, who was awaiting surgery for breast cancer. “They keep turning her down. They don’t have a source of testing.”

He lashed out at Trump for indicating that testing is readily available. “Now it’s time for me to call his bluff. If he’s got the equipment … he’s got to provide it,” Zollman said.

In New Mexico, along the southernmost finger of the Rocky Mountains, Mora Valley Community Health Services and a companion agency attend to elderly patients living in extreme poverty in Mora County, where there have been no confirmed COVID-19 infections and few if any people tested.

With a population of 4,500 that is more than 80 percent Latino, the county is among the economically poorest in the nation. Average combined household income is $27,000.

“There’s elderly out there that have dementia, who don’t have a family … who eat out of cans,” said Julián Barela, CEO of Community Health Services, which ordinarily serves a steady stream of Medicaid and Medicare patients with health, dental and behavior health services.

Under new state directives, the clinic has scuttled all non-emergency appointments — most of its caseload — to comply with a measure designed to conserve dwindling protective gear such as masks, gloves and gowns for health care workers, Barela said. The clinic has yet to see a patient with telltale symptoms of coronavirus worth testing.

Barela said it has been alarming to turn away patients who feel they need attention as new federal grant money arrives.

“We don’t have an emergency backlog, it doesn’t seem reasonable that we’re just shut down,” he said. “We should not operate the same as New York. There is no reason for it.”