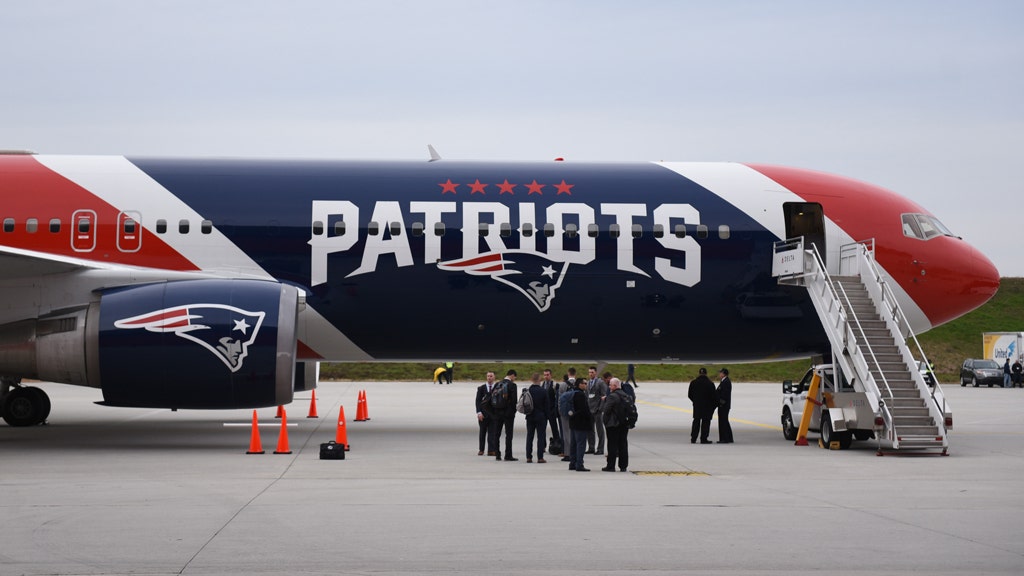 At 3:38 a.m. Wednesday morning, the New England Patriots' team plane departed from an unusual locale: Shenzhen, China. On board the Boeing 767, in the cargo hold that used to be home to Tom Brady's duffel bags, were 1.2 million N95 masks bound for the U.S.

Video and pictures of the event show workers in masks and full-body suits at Shenzhen Bao'an International Airport loading box after box of the scarce and valuable personal protective equipment onto a red, white and blue plane emblazoned with the Patriots logo and "6X CHAMPIONS." 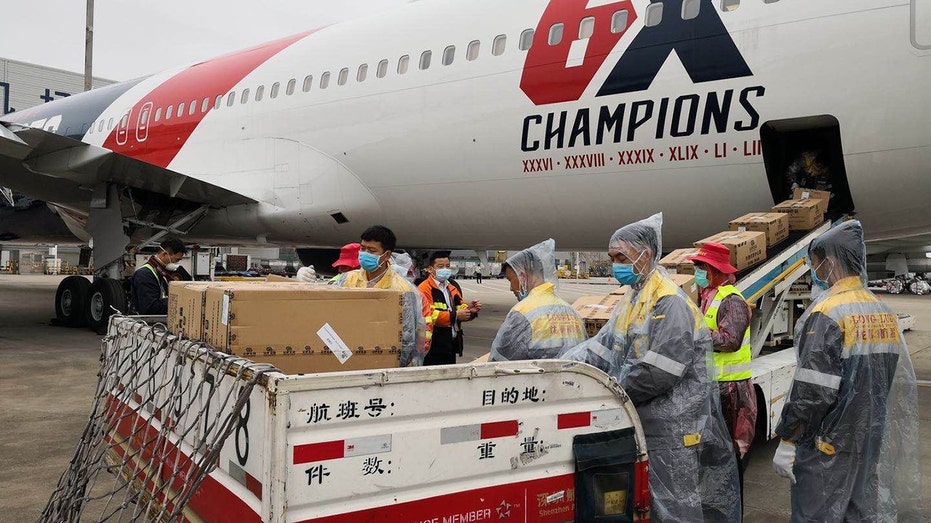 The plane was permitted to be on the ground in China for a maximum of three hours, people familiar with the matter said, and the crew was required to stay on the plane while a ground crew loaded the cargo. It took 2 hours and 57 minutes. On Thursday, that plane will land somewhere more familiar: Boston Logan International Airport.

The story of this remarkable delivery, based on documents and interviews with people involved in the operation, is a window into the frenzied scramble by states to acquire life-saving equipment needed to battle the coronavirus pandemic. The process involves not just tracking down goods, but also tapping intermediaries and calling in favors to navigate a dense global bureaucracy that the pandemic has virtually paralyzed.

As the country and the medical system have grappled with responding to the virus, one of the greatest pressure points has been the shortage of N95 masks, critical equipment to protect against its spread. Demand has significantly outpaced supply, putting health-care workers and patients at even greater risk. 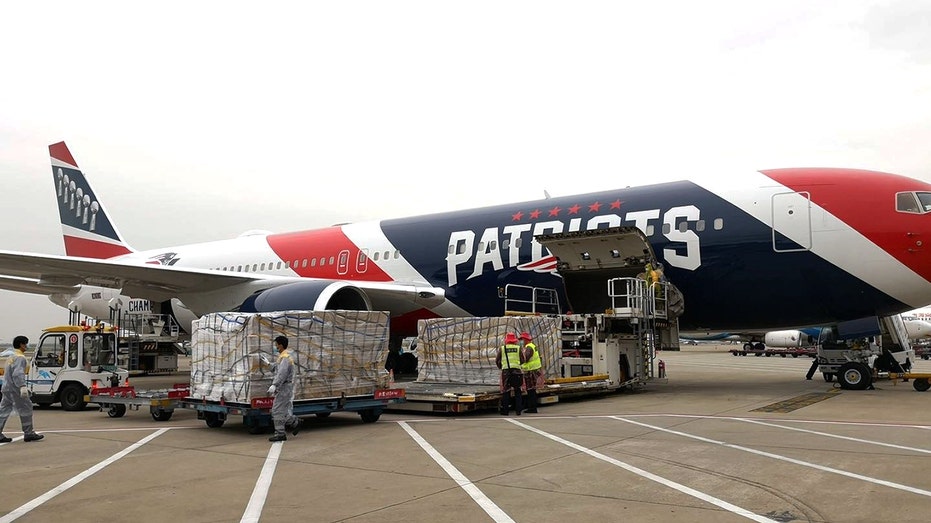 Massachusetts' quest to acquire these masks was a tense, weekslong saga that began with the state's governor and winded through embassies, private partners and the U.S.'s most successful football franchise. After a layover in Alaska and an anxious process to win approval from Chinese officials, the plane was given permission to land in China to collect the masks.

"I've never seen so much red tape in so many ways and obstacles that we had to overcome," said Robert Kraft, the Patriots' owner. "In today's world, those of us who are fortunate to make a difference have a significant responsibility to do so with all the assets we have available to us."

The effort began with Massachusetts Gov. Charlie Baker, who was concerned about the state's mask supply and, two weeks ago, believed he had struck a deal to acquire more than a million of them from a collection of Chinese manufacturers. But officials had to figure out how to get them shipped out of China at a time when unusual cargo shipments out of the country can be especially tricky.

"I just have to get them here," he told a longtime friend.

That longtime friend was Jonathan Kraft, Robert Kraft's son, who holds two jobs that became highly relevant to the proceedings. Jonathan Kraft is the chairman of the board at Massachusetts General Hospital, one of the country's most renowned facilities. He's also the Patriots' president, and the team had something it thought might be of help: a giant airplane.

There were tough questions to resolve. Robert and Jonathan Kraft first had to check if the plane were ready and able to make such a lengthy journey on such short notice. There was also the fact that the team's Boeing 767 is a passenger plane built to carry Bill Belichick and Tom Brady, not massive stores of cargo.

Then, most critically, they had to secure permission to land in China — a delicate feat during this global pandemic. Even if they received the proper permits, they were worried the pilots would be required by China to quarantine for 14 days before returning.

The primary issue was the simplest: getting the right to land the 767. Gov. Baker, the U.S. State Department, Robert Kraft and others sent letters to China's general counsel in New York requesting the special permits. The letters, dated March 24 to 30, ask for waivers to allow the humanitarian mission and state that no member of the crew would leave the aircraft.

By last Friday night, the crew had moved to Wilmington, Ohio, because the plane needed an avionics upgrade for the international trip. The mission received waivers from China to land and do so without quarantining — nobody would be on board besides the necessary flight crew — but they were told the crew still needed visas. So the entire group scrambled to a local pharmacy and took pictures for the application. The pictures were flown to New York to be taken to the Chinese embassy, and then flown back to Ohio. Huang Ping, China's counsel general in New York, proved to be a major ally in the effort and get the rush jobs done, including by opening the consulate over the weekend to get the visas processed in time, people familiar with the matter said.

Next, the plane headed to Alaska. The only breaks the crew took from then on were for mandatory rest and downtime. As a precaution, the crew included maintenance people and spare parts so they could solve any potential issues in China without people on the ground.

In addition to handling the logistics and the plane, the Kraft family had agreed to pay $2 million, or approximately half the cost of the goods. The order of 1.7 million N95 masks was produced by various manufacturers across the country. "What we needed," said Jim Nolan, who spearheaded the logistics as the COO of Kraft Sports and Entertainment, "were boots on the ground to gather the goods and get them to the right place."

They needed even more than that: the products needed to be counted, inspected and then quickly ushered through customs. Through intermediaries, people familiar with the matter said, they were connected to executives at Chinese tech giant Tencent, who pledged a crew of more than a dozen people. Over the course of several days, the Tencent team mobilized to inspect and aggregate the masks. Some facilities had less than promised and were still waiting on the production to be complete. The crew stayed with the goods overnight to make sure nothing happened to them before taking them to the Shenzhen airport and shuttling them through customs.

By early Wednesday morning on the East Coast, the Patriots' 767 had landed in Shenzhen from Alaska. It stayed grounded for 2 hours and 57 minutes — just within the three-hour window the crew was given. Because cargo wasn't allowed on parts of the passenger plane, only 1.2 million of the masks fit. The rest, which is being held securely by Tencent, will be transported shortly on another shipment.

The plane headed back to Alaska, and then Boston. But that wasn't the last stop for some of the masks. Robert Kraft, despite his franchise's historical acrimony with the New York Jets, has always held a soft spot for New York. He attended Columbia University, has a residence in the city and said he was especially moved when the two teams played in the first weekend of games after the 9/11 attacks, when the Patriots were led out of the tunnel by a Patriots' player whose family members served in the New York City Fire Department and were being cheered on the field.

Kraft added that he has been moved by the leadership of Gov. Andrew Cuomo over the last several weeks. And that gave him an idea.